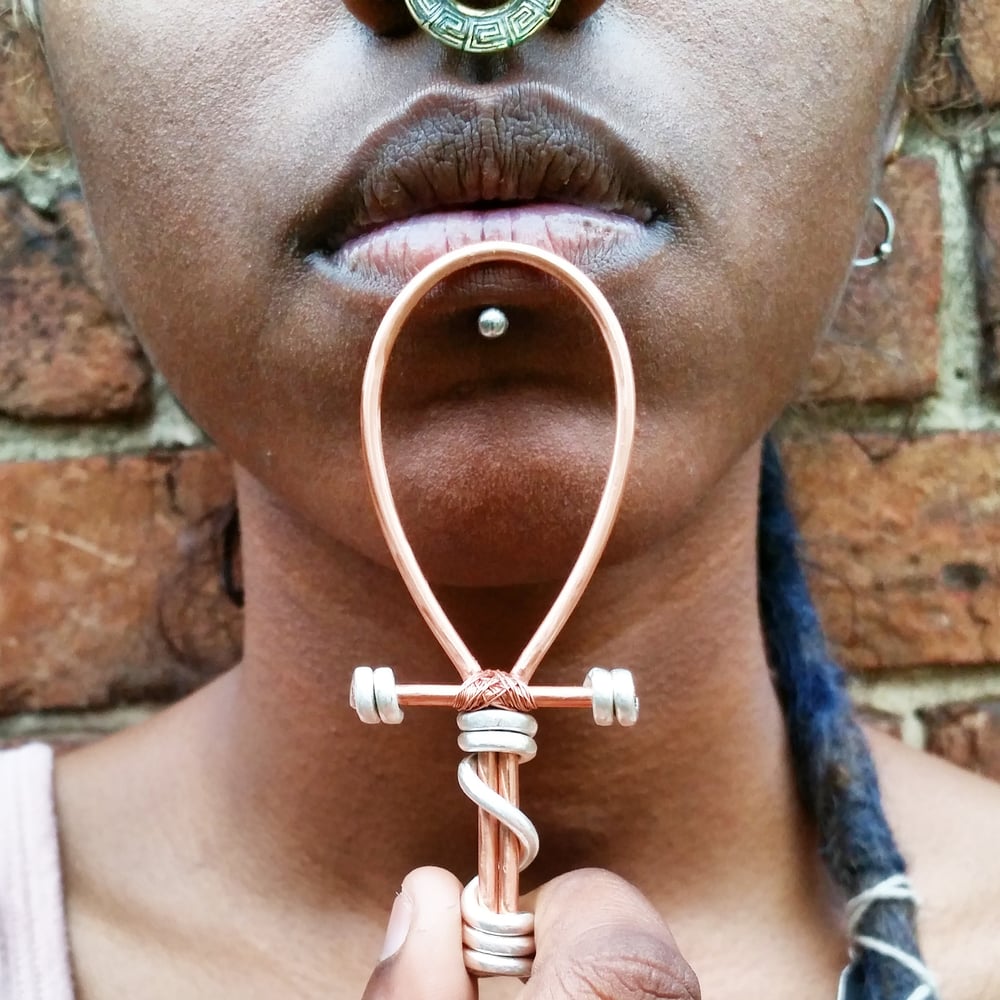 3 1/2" - 4" Ankh in length
We see the ankh as a frequency oscillator, an energy transformer/transmitter
We believe that when a conductive metal Ankh is worn on the body it has the ability to transform the energy being emitted from the body having a positive effect on the aura or human biomagnetic field.
HOW?
Through the SHAPE of the Ankh in which the energy emitted from the body flows through that SHAPE which in turn oscillates that energy or alternates the current transforming that energy and emitting that change of energy out into the biomagmetic field or the aura.
Which we believe at that point is re-absorbed into the body for benefit.
We believe that when a Crystal is attached to the Ankh, the energy of that crystal is involved in the transformation/emission/absorbtion process as well as adding it's energetic properties into the process fusing those properties with your energy.
We believe that the prolonged wearing of the crystal Ankh or crystal piece will result in the body attuning itself to the frequency or vibration of the crystal piece Thus the crystal becomes an ascension guide for you.
According to Amen the author of "The African Origins of Electromagnetism" the shape of the ankh, when wrapped in coils, allowed it to carry an electromagnetic charge.
The Ankh was the key used to control the flow of water in the underground flow of the Nile
The body is made up of 70-75% water which means the Ankh must have a similar effect on the human body
The Ankh represents the divine feminine at the top, the Oval (Magnetism)
And the Divine Masculine at the bottom, the staff (Electrical charge)
It is an electromagnetic tool for healing and balancing energies
The top loop is said to represent eternal life while the cross represents the material plane

"Various forms of copper have been used for medicinal purposes throughout the history of mankind. Today, as more information becomes available, alternative health care and home remedies are gaining popularity.
Copper is a trace element (Cu) which has been well accepted for it's reported healing properties and its role in defending our bodies against infection. Copper is known to improve the production of hemoglobin (the main component of red blood cells), myelin (the substance that surrounds nerve fibers), collagen (a key component of bones and connective tissue), and melanin (a dark pigment that colors the hair and skin). Copper also aids in the bodies absorption of Iron (Fe) another important trace element.
As a healing metal copper is also used for problems with excess fat. It benefits the liver, spleen, and lymphatic system.
As an antioxidant, Copper (especially when combined with vitamin C) seeks out damaging particles in the body which are known as free radicals. Free radicals occur naturally in the body and can damage cell walls and interact with genetic material. Free radicals are believed to contribute to the aging process. Antioxidants can neutralize free radicals and may reduce or even help prevent some of the damage they cause. Copper is also said to aid in the stabilization of metabolism and can also be of benefitt to the lungs, improving the exchange of oxygen and filtering out pollutants.

Copper and other essential trace minerals cannot be formed by the human body. These minerals must be ingested in the diet or absorbed by the skin. The long held theory is based on the belief that when copper is placed in close proximity to skin (the largest human organ), a constant although minuscule amount of the essential element is transferred into the skin tissue.

Silver possesses the highest conductivity of any element, the highest thermal conductivity of any element even higher than copper,  and is the most reflective metal on the planet
Silver is reflective and used to mirror the soul bringing people calm and balance. Another aspect of the silver natural Healing belief is that wearing this jewelry brings the wearer more in tune with the vibrations and flow of the universe. It is the metal of emotions, love and healing. Silver's properties are strongest during the new and full moon.
Silver is an excellent metal for all around good health. It is arguably the most effective antibiotic known to man. For centuries silver coins were often placed in a glass of milk as a means of preservation. It can be consumed as a defense against germs, viruses, bacteria, allergens and pathogens.

Silver Metaphysical Properties
Manifestation of wealth, riches, and health
Improves quality of speech and brings eloquence to conversations
Calming and balancing reflects away negativity and evil intentions
Brings the wearer more in tune with the flow of the universe
A mirror to the soul
Increases strength of perception awakens and increases psychic and intuitive capacities
Provides strong connection between physical and astral bodies
Increases the strength of gemstones and crystals, particularly Moonstone, Amethyst, Quartz, and Turquoise
High malleability (ability to be shaped), Enables the user/wearer to bend energies, creating vital energy centers Placed on your forehead, activates and opens your Third Eye Chakra Astrologically associated with #Cancer and #Aquarius, the element Water, and direction West.